Self Driving in Morocco

No More Mistakes with road trips along the Moroccan Highways

Are self-driving and road trips possible in Morocco? Oh sure, we made it!!! Before I hop into our lovely road trip from Fes to Marrakech, let me give you some background on the rental procedures we had to face. Read it all before you decide to rent a car in Morocco.

This was definitely one of the riskiest things my friend and I (two girls) could ever do in Morocco. Excited for once that we have stepped outside of our comfort zone, we booked online a car through EconominyBookings.com for our 4 days trip in Morocco. We paid a deposit of € 56.38 and the rest of € 107.38 was to be paid locally to the car rental company in Fes. Everything seemed to be done perfectly but what happened to us upon arrival was particularly curious.
There was no office of Economy Bookings at the airport and while wondering how to handle the situation a Moroccan man came right there to meet us asking if we had rented a vehicle with Economy Bookings. We walked together with him across the large parking lot in front of the airport and reached another one just ahead of where our alleged car was parked. We settled in the car to finish the rental procedures. The vehicle was bigger than the one we have rented. 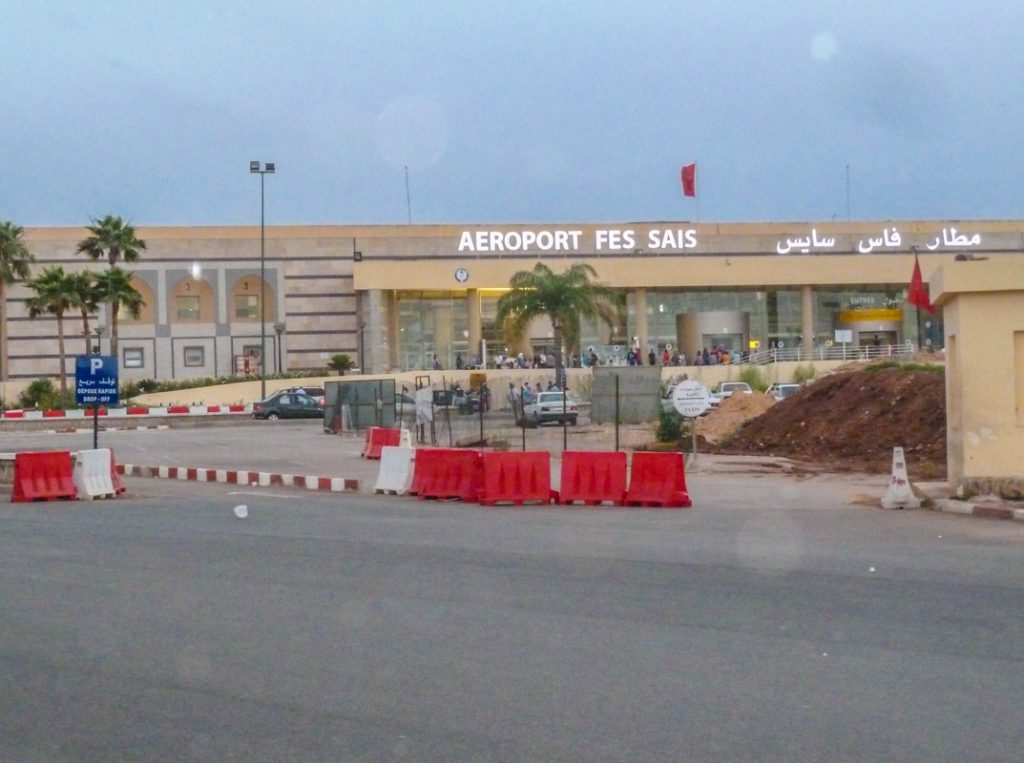 Here came the fun!!! He asked us € 900.00 as a deposit, by cash or by credit card transaction. As I wrote before while booking online we have given them the debit card details which were written on the papers he was holding in his hands but it was not enough. We certainly did not expect this request because it was not written anywhere. At that point, we had to change all our plans because we didn’t have all that money with us and especially we didn’t understand the reason why we had to pay such a big amount of money if it wasn’t indicated on the rental papers.
Since it was the first time for us to rent a car were we probably ignoring these rules already known all over the world? I don’t know! All that we could do was asking the man to drop us in the City Centre, close to the Medina. He was so kind that he accepted to do this favour.
Fully trusting him, we left the airport. Suddenly we found ourselves somewhere out of the road, in the middle of nowhere. He said he would have watched the football match because his favourite team Barcelona was playing right at that moment. In fact, he stopped the vehicle close to a hut to watch the match. He left us there saying that he would have taken us to the Medina in case Barcelona had won. 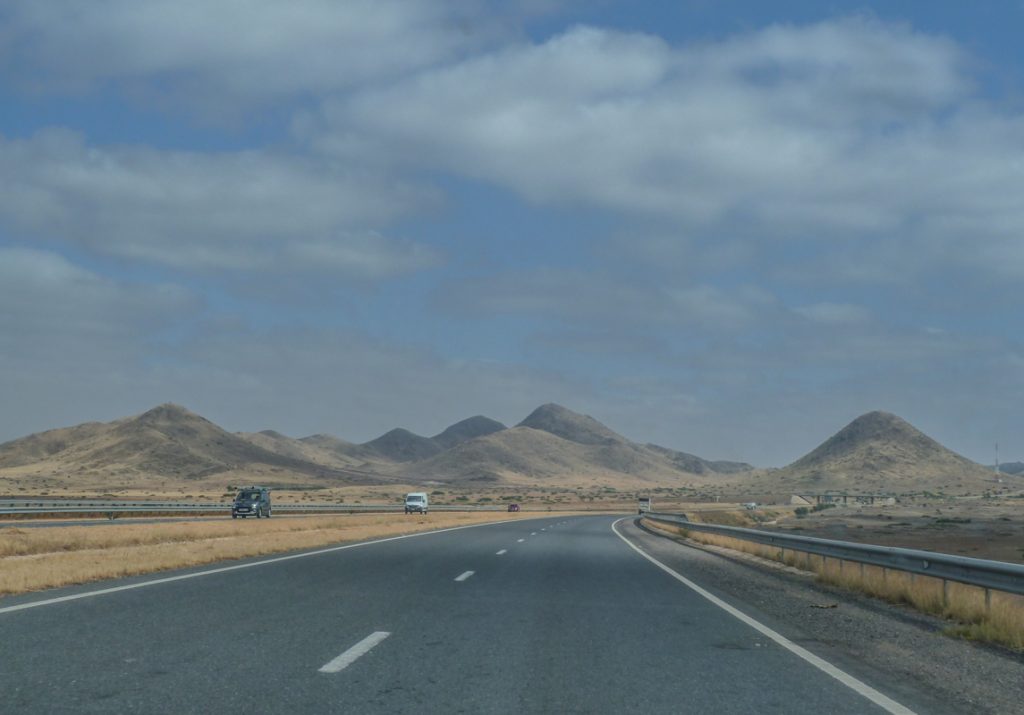 To be honest, I started to be slightly nervous. I didn’t like that place at all. The hut where they were watching the match was plenty of men. Only men, not even a single woman and there were no other buildings around. My friend tried to calm me down saying that nothing would have happened but believe me, it was not that much easy especially when seeing him not caring about us at all, I was going terribly mad. In our search of trying to convince him, we begged him to call at least a taxi which could take us to our hotel and thank God, someone there present was about to leave and he took us to Medina.

Finally, when we reached the walls of Medina, we were really happy, we lost the deposit of € 56.38 which we paid previously online to rent the car but at least we were safe. 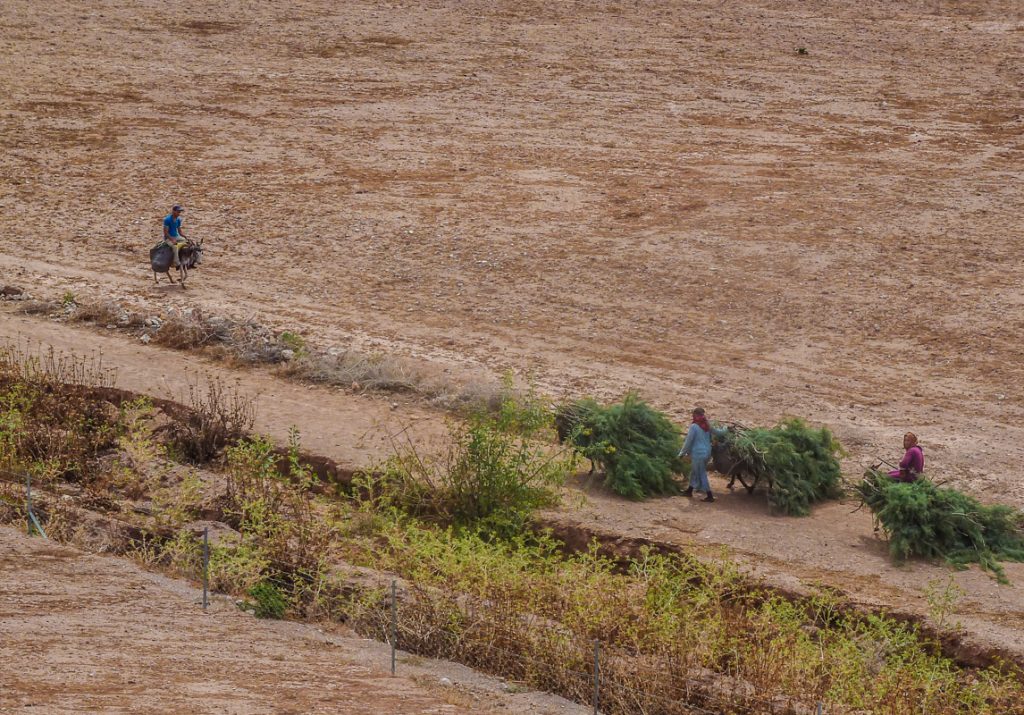 Upon arrival to our riad (Lalla Fatima Ouedghiri), the manager having understood the situation helped us to find another solution. The day after he took us to a friend owning a local renting company who could rent a car to us for a cheap price. After all that happened to us, I didn’t know how I have been able to trust them but we had to try because all our hotels were already booked. Fortunately, this time we were lucky in so.
The vehicle they gave us had very little gas that we had to go around and around to find immediately a gas station. Once did this, we were finally ready to start our trip. The planned stages were the following: Fez, Rabat (via Meknes), Casablanca, Marrakesh and Fez again from where we had the flight back home. 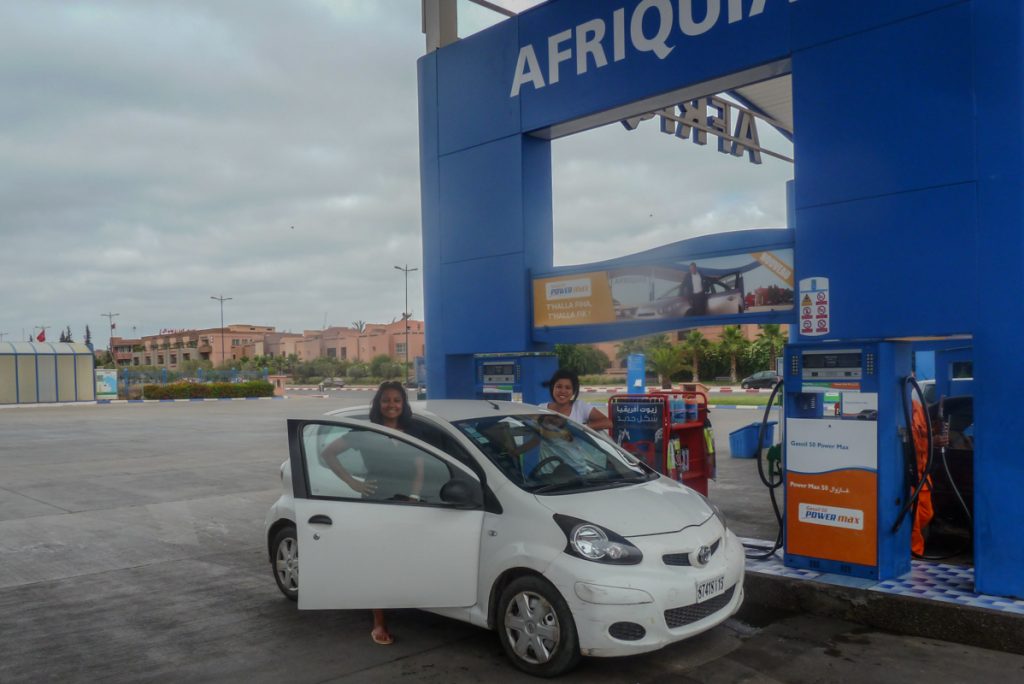 Their highway had great viability; there were just a few cars on the road so we could drive smoothly. We were also tempted to drive fast but many people in Italy, who have already been to Morocco, have recommended us earlier that we would have faced fines for sure for over speeds. So we kept the limit always under control. Since we saw their method to detect the speed limit, we no longer wanted to risk. In fact, the Moroccan police were very fond of speed traps, plenty of them stay hidden behind the trees along the highways with cameras and when they detect a vehicle exceeding the limit, they inform the policeman at next exit who somehow stopped the driver. Yes, we saw the policeman standing in the middle of the highway waiting for the vehicle to stop. Along our road trip, we saw this so many times. We didn’t want to waste our time and money for this reason so we maintained the limit as requested which if I’m not mistaken was 120 km/h for highways and 60 km/h in urban areas.
Related: off-roading trip around Marrakech  with Morocco Tours 4×4 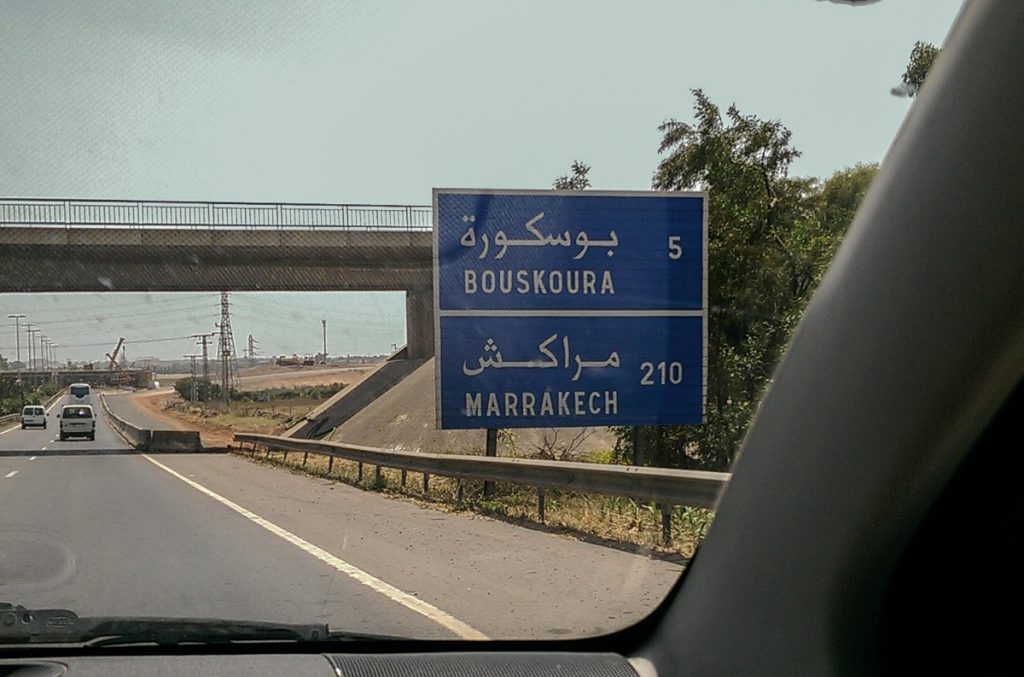 Our car probably had a small problem; it was a bit noisy when using the break. It seemed like the tire could be detached out. But neither of us ventured to say this simply because we didn’t want to scare each other.
One more thing we needed to be aware along the highway was people who walked across in the rural areas. It happened frequently.
We also tried once to walk across the highway while driving back to Fes. At some point, we took a stop, on a bridge. When we stepped out of the car we saw that the view on the other side of the highway was much better. When I wanted to ask my friend if she was willing to cross the highway, I saw her already running towards the traffic island but then suddenly I heard her screaming at my direction not to jump because, in the middle of the highway, between the traffic island instead of pavement, there was a hole that went directly into the river. We were on a bridge! We didn’t expect that hole in the middle. Once back to Italy, we learned that all bridges in the highway have a hole in between the lanes of the opposing direction; they are not connected with each other. Imagine what they would have written on newspapers: two strangers jumped from the bridge in Morocco! After that moment we were a bit shaken but it didn’t stop us. We drove a bit further, until the end of the bridge, where crossing the highway in order to take all the wanted photos. Back then it was a scary adventure but now, it is a crazy and funny adventure that we still laugh off when remembering. 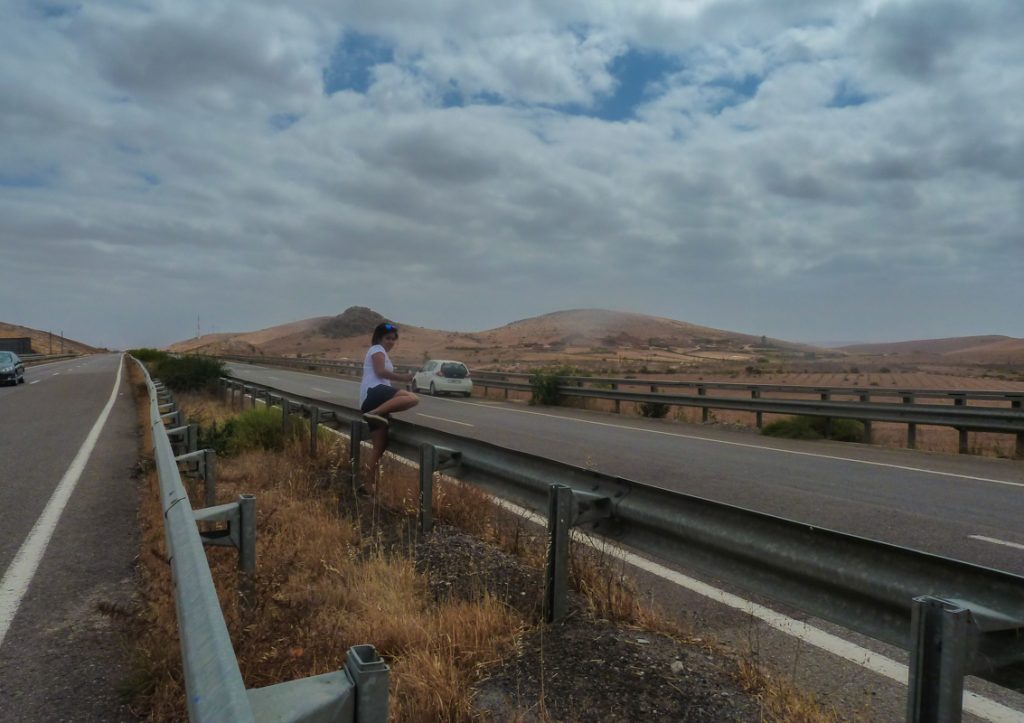 In our road trip experience in Morocco, a piece of advice goes for parking in the cities. In Morocco, it was almost like a game. Most people parked where they liked but parking attendants patrolled many streets in the big cities looking out for cars they can ticket. There was no hard rule as to why you would have targeted so it was better to park where there was little room for misinterpretation of the situation. I think it is better leaving the car close to the highways and getting to the city by taxi which was not only cheap but also the easiest way to best manage both the parking and the time. People in the cities seemed not following the traffic rules while driving or walking and for this reason, it has been hard to handle it. Morocco was a Google maps friendly country. It helped us a lot. We bought a Moroccan sim card upon arrival to the country in order to use internet services without spending too much. We could use google maps to guide us. It worked perfectly except once when it took us wrongly right inside the walls of Medina of Marrakech. Heavy motors were not allowed inside the Medinas, only carts, mopeds and scooters were allowed there, so imagine what happened when they saw the two girl self driving in Marocco.

There were no food centres along the highways so we had to enter into the cities when wanting to eat.
Finally, when we finished our trip and gave back the car to the rental company in Fes, we could finally be relaxed. Both of us, even if we didn’t talk about the tire during the entire journey, knew very well that something wrong could have happened and if it had happened, we wouldn’t have known what to do. Thankfully everything went better than we thought. Our road trip which started with a bit of panic turned into an amazing trip.
If I ever go back to Morocco, I will for sure rent a car again!!! There is nothing compared to what we saw along the way: wonderful nature, lovely rural villages, cute little children, donkeys at work and so on and on! I can now honestly say that it was definitely a unique experience that we will never forget. 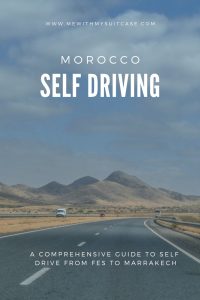 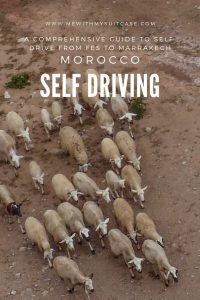 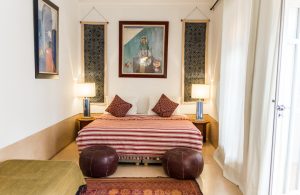 The Best Bucket List Adventures You Can Go On